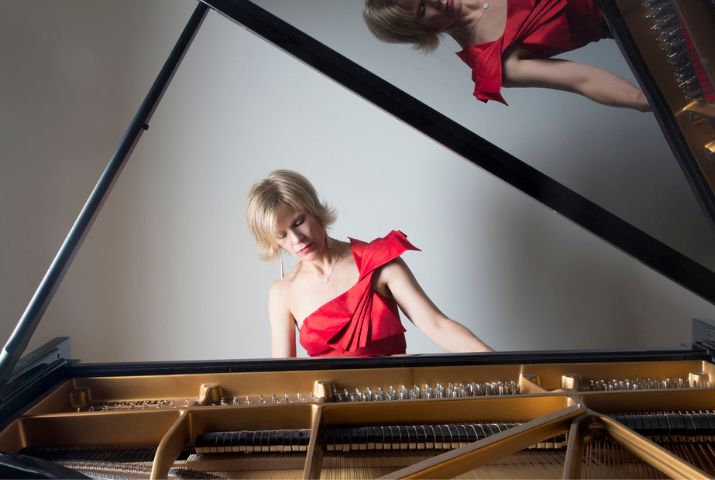 Steinway Artist Lura Johnson is celebrated by critics and audiences for her insightful, emotionally impactful performances. The Washington Post describes hearing her play as “one of life’s great pleasures.” The Baltimore Sun praises her “surging expressive force… impressive bravura…” and “exceptional vitality, color, and impact.” Performing more than one hundred concerts annually as a soloist, chamber musician, and orchestral pianist, Lura captures, distills, and powerfully communicates the spirit and personality of the music she performs.

In this performance, she presents her visionary solo project, The Art of Prelude and Fugue. Originating in 2017, the project is a first-of-its-kind curation of the entire Well-Tempered Clavier of J.S. Bach interspersed with the complete Preludes and Fugues of Dmitri Shostakovich. Many pianists have performed and recorded the complete Well-Tempered Clavier of Bach. A handful have performed and recorded the entire opus of Shostakovich’s preludes and fugues. But no one has performed both monumental cycles in their entirety—until now. Presenting these two works interstitially is both shockingly unorthodox and a most natural partnership. The curation both contextualizes an exceedingly well-known work and brings to greater attention a lesser known masterpiece.

Lura has been featured as a soloist with the Baltimore and Delaware Symphonies, performing Rachmaninoff’s First Piano Concerto, Grieg Concerto, Mozart’s K. 466, Gershwin’s Rhapsody in Blue, and Saint-Saens Wedding Cake Waltz. She is one of few keyboardists with the versatility to perform the complete Bach Brandenburg Concerti, moving seamlessly from the continuo harpsichord role in Concertos No.1 through 4 and No. 6 to the solo role in the magnificent Concerto No. 5. Similarly, in the Baltimore Symphony Orchestra’s 2020 production of Amadeus Live, Lura navigated the solo role in several Mozart Concerti, as well as performing the supporting role of organ continuo, eliciting the praise “meticulous and brilliant” from the Montgomery County Sentinel.