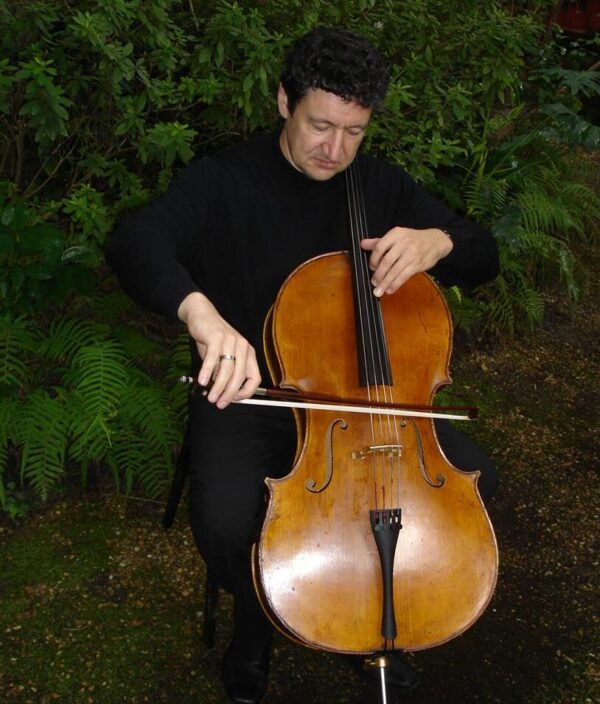 Dr. Steven Thomas, cello, has an unusually vast wealth of performing experience, having appeared as soloist and recitalist, orchestral and chamber musician, and conductor on four continents.  His repertoire includes classical and non-classical music from Baroque to newly commissioned works, as well as Broadway shows and popular music.

A top prize-winner in the Villa-Lobos (Rio) and Bach (Washington) International Cello Competitions, as well as the Hudson Valley and Charleston Competitions, Dr. Thomas has appeared as soloist with orchestras in North and South America and throughout Europe. As a member of the Cantilena Piano Quartet, he toured and performed in most of the major concert halls of Europe and the U.S. He has performed as recitalist and chamber musician at festivals such as Windsor (England), Gstaad (Switzerland), the Israel Festival (Jerusalem), Prague, Tivoli (Denmark), Itu and Fortaleza (Brazil). As a chamber musician, he has collaborated with such renowned artists as Yehudi Menuhin, Erick Friedman, Donald MacInnes, Jesse Levine, Joseph Robinson, David Shifrin, Peter Frankl, Boris Berman and the Miami String Quartet.

Steven Thomas has served as the Principal Cellist of several symphony and chamber orchestras, including the New Haven Symphony Orchestra and Orchestra New England, and has given over 1,500 concerts in that role in the last 25 years. He is also the Music Director and conductor of the Saybrook Orchestra at Yale University.  In 2007, he was appointed to the University of Florida’s School of Music, following a 13-year tenure at the Hartt School, where he had chaired both the String and Chamber Music departments.  He has recorded for the MVL, Point, Delos, Koch International and MMO labels.

American pianist and music educator Kevin Sharpe began his piano training at the Newark School of the Arts at the age of twelve and continued with Frances Walker at the Oberlin Conservatory of Music.  After earning a bachelor’s degree there, he earned a master’s and doctorate degree from Indiana University under the direction of Menahem Pressler.

Prizes Sharpe has won include the Rudolph Serkin Prize of Oberlin College and the first prize of the 1991 Johann Sebastian Bach International Piano Competition in Washington.  He was also a winner of the National Association of Negro Musicians Competition and the National Young Artists Piano Competition.  Since then Sharpe has performed as a pianist in the USA, Mexico, Iceland, Finland, Argentina, Hong Kong and the Czech Republic.  His interpretation of Bach’s Goldberg Variations received much attention and was praised by Bernard Holland, music critic of the New York Times.  A CD with recordings of works by Respighi, Samuel Coleridge-Taylor, Mendelssohn, and Ravel was released on the Eroica label.  Sharpe teaches piano and chamber music at the University of Florida, where, in 2000, he received their Teacher of the Year Award.

Tickets are $15, general admission; $10, seniors/military; students and children under 12 free.  Tickets will be available for purchase at the door.  McDaniel College follows current CDC protocols and recommendations related to COVID-19 and we ask that visitors adhere to all policies and regulations in accordance with the latest guidelines.  We appreciate your cooperation.  For more information, visit www.facebook.com… or call (443) 974-6374.