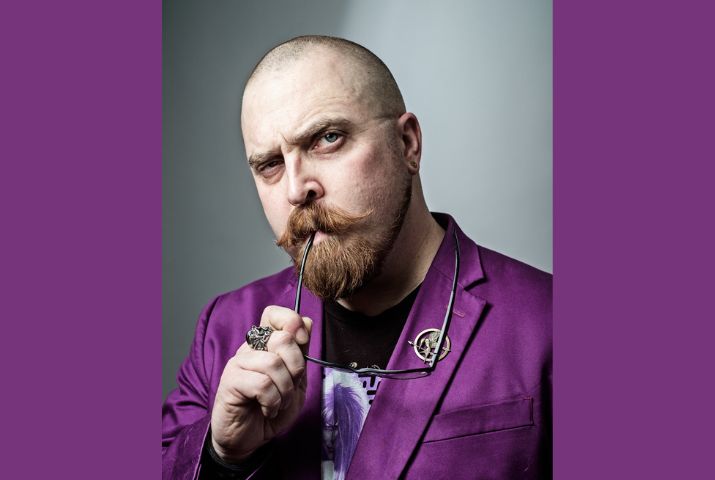 Tommy Sinbazo is a veteran of the nerd comedy scene. His quick wit and off the cuff humor has been slicing though crowds like a Vorpal sword rolled by a loaded D20 for over 18 years. Crawling from the depths of the Geek Comedy Tour, this Cosplaying, Leathersmithing, Magic Missle of Myrth is guaranteed to amuse. He has shared the stage with comedians Ralphie May, Brian Posehn and Kevin Meeny. He has been invited to perform at numerous comedy festivals, conventions and has even entertained American troops stationed overseas. If his face is familiar, you may have seen him in a mattress commercial. If his voice rings a bell, you may have heard him on the radio or as one of the hosts of The Laughfinder Podcast.

Featuring Ashley Pontius:
Ashley got her start at the age of sixteen, writing jokes for comedians twice her age. After a brief period working on Stephen Colbert’s Campaign for Truthiness, she decided to pursue comedy as a career. She has been seen at the Laugh Factory in Chicago, Church of Satire in Hanover, PA, and comedy clubs all over the country. Ashley was a 2019 Finalist for Magooby’s Comedian of the Year and most recently opened for Matt Braunger at the Weinberg Center for the Performing Arts in Frederick, MD. Follow her on social media @ashleypontiuslaughs for content and show updates!

Hosted by Christian McCartney:
Christian McCartney is an animated, energetic, and entertaining comedian. He placed 2nd in the Magooby’s Joke House 2021 New Comedian of the year competition. Christian has amassed more than 3.8 million followers on TikTok from around the world. He has performed with comedy stars such as TK Kirkland, April Macie, and Kevin James Thornton. His numerous voices and body contortions make him a must watch act. He is an unashamed follower of Jesus Christ and shows this by ending every show by giving glory to God.