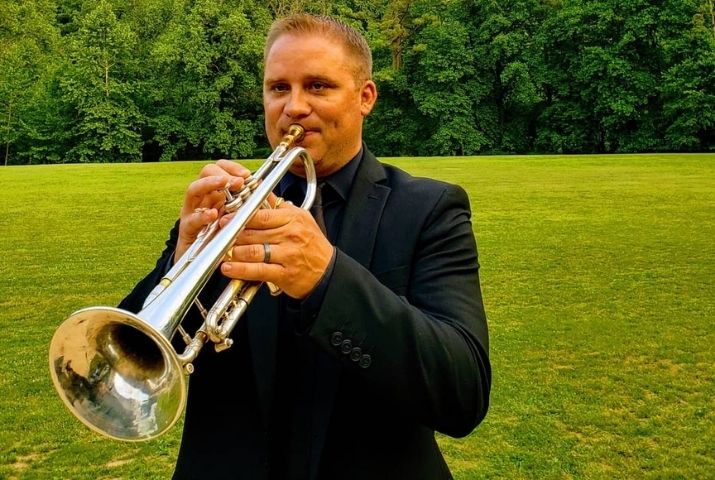 The Leister Quartet with Nick Reider

Nick Reider has been performing and teaching trumpet in the Mid-Atlantic area for the last 19 years. Nick provides private instruction in classical and jazz styles for students in the local area at places like Coffey Music, McDaniel College, and Carroll Community College. He also organizes faculty performances for the McDaniel College Jazz and Classical Chamber ensembles as well as performs with the College Masterworks Choir. Nick also leads his own jazz group and classical brass quintet, and performs with many Reggae, Ska, and Funk bands in the local area. Nick has received grants to organize and perform concerts for patients at a VA Rehab center in Baltimore.

Nick’s performing highlights include being a featured soloist in the Westminster Symphony Orchestra, and the Carroll County Jazz Ensemble. He has recently performed at Merriweather Post Pavilion, the historic Howard Theatre, The Fillmore, 9:30 Club and has performed with Grammy Award Winners The Isley Brothers, The B-52’s, Toots Hibbert, and Cuba Gooding Sr. In 2009, he performed for the Presidential Inaugural Ball, and in 2010 traveled to the Middle East to perform for U.S troops stationed at Al-Udeid Military Air Base in Qatar. Nick’s work in the studio is also extensive – composing, recording, and performing music for jazz, classical, rock, pop, commercial, reggae/ska, zydeco, gospel, and funk music for several local bands in the Baltimore, D.C., and Annapolis areas, and his recordings have reached #1 on Billboard in Contemporary Jazz and Reggae.

$10
40% of ticket sales will benefit Find Your Purpose

This concert is part of the monthly Leister Jazz Series. Each concert features a different guest artist and will benefit a different local nonprofit organization.