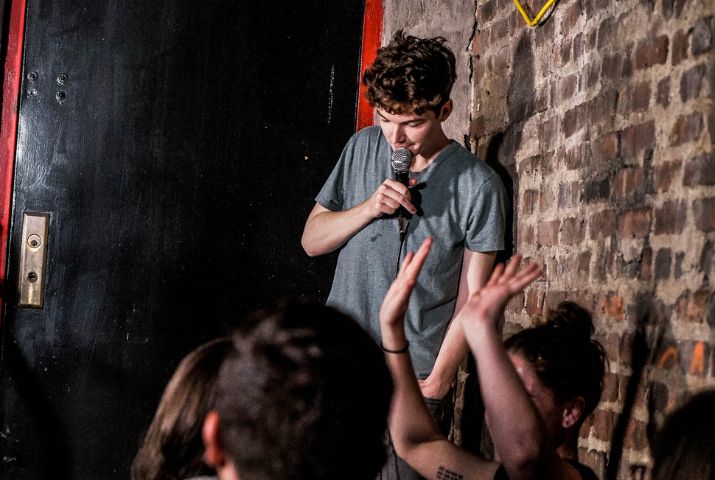 Camille Roberts is just another one of those queer recovering Catholics trying to find her way through comedy but with some unfortunate twists.  Known comedically for her long form crowd work and self aware story-telling, some fans have also described her as “major cult leader energy” or simply “lesbian Andrew Garfield.” This show, Camille et al., builds from grappling with the weight of social media and how this platform intersects with our lives into stories about reconciliation, estrangement, and abandonment. This show will leave you wondering, is she okay? IT IS FUNNY THOUGH.  WE HAVE FUN.  LIFE HAS MEANING.  Camille is joined by two amazing comedians and friends– Hayden Arrington and Katie McKelvie.

Roberts is a New York based comedian (TikTok: @camillerobertsverified) who has been featured on the DC Underground Comedy Fest, Charm City Comedy Festival, and The District Queer Comedy Festival. She has been featured across the country and abroad (DC Improv, Laugh Boston, the FunnyBone, Flappers, and Laughs Unlimited) opening for headliners like Whitney Cummings. This past year, she sold out the premiere to her show, “One Woman Show With One Other Woman On It” at the D.C. Drafthouse Comedy Club, which as it turns out, is just a show with one woman and one other woman on it.

Katie McKelvie (Opener) – Katie is a comedian and humor writer whose comedic style has been described as “tired mom who has to run to the grocery store after this show to pick up some bananas.” Katie can be seen performing all over the Washington, D.C. area and has featured at the Cleveland Comedy Festival, She-Devil Comedy Festival, the Charm City Comedy Festival, and the North Carolina Comedy Festival. In her spare time, she enjoys a fleece blanket, a comfort shoe, and naps.