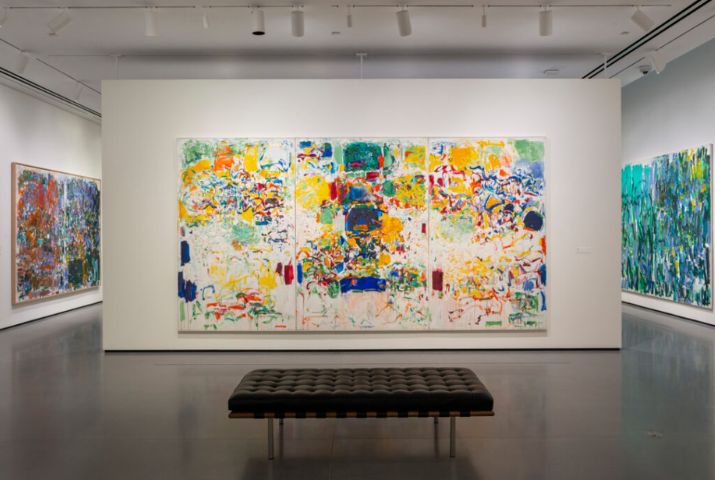 DepARTures: Joan Mitchell at the BMA

Bus Trip to the BMA

The BMA has long focused on acquiring the art of the present moment, while maintaining and deepening a historic collection made relevant through vigorous development and reinterpretation in all collecting areas. Through the courageous and risk-taking vision of previous Museum leaders, the BMA assembled and presented one of the most important collections of 18th-, 19th-, and 20th-century art in the United States. These visionary actions established the fundamental character of this Museum.

Your ticket on this day trip to the BMA gets you access to all current exhibitions AND their exclusive new Joan Mitchell retrospective! Co-organized by the BMA and San Francisco Museum of Modern Art, this comprehensive exhibition follows the career of the internationally renowned artist who attained critical acclaim and success in the male-dominated art circles of 1950s New York, then spent nearly four decades in France creating breathtaking abstract paintings that evoke landscapes, memories, poetry, and music. The exhibition features 70 works—from rarely seen early paintings and drawings to multi-panel masterpieces that immerse viewers with their symphonic color. Highlights such as To the Harbormaster (1956) and South (1989) evoke urban environments and the lush French countryside, while No Rain (1976) and Sunflowers (1990-91) engage with the legacy of Vincent Van Gogh. Two enormous multi-panel paintings, Ode to Joy (A Poem by Frank O’Hara) (1970-71) and La Vie en Rose (1979), demonstrate Mitchell’s passion for poetry and music. The exhibition reiterates these artistic connections with an immersive soundscape that includes quotes taken from Mitchell’s writing and interviews and literature and music significant to the artist.

Please arrive at the parking lot across from East Middle School (121 Longwell Ave, Westminster, MD) on the corner of Longwell Avenue and Key Street promptly by 9:15am. The shuttle bus will leave for the Baltimore Museum of Art at 10am. A snack on the bus will be provided.

We will depart from Baltimore at 3pm.

Your ticket includes entry into the Joan Mitchell exhibit and all the shows listed below:

Salman Toor:
No Ordinary Love will feature more than 45 paintings and works on paper made between 2019 and 2022, that weave together motifs found in historical paintings with recognizable 21st-century moments to create new worlds based in Toor’s imagination. Among the works are several made especially for the exhibition and inspired by paintings in the BMA’s renowned 17th- to 19th-century European collection, such as Sir Anthony van Dyck’s Rinaldo and Armida (1629). This builds on the museum’s commitment to inviting contemporary artists to reinterpret historical works within its holdings, with prior projects by artists such as Tschabalala Self and Stanley Whitney. No Ordinary Love captures the ways in which Toor upends art historical traditions to center brown, queer figures and to investigate outdated concepts of power and sexuality. The exhibition will also include a selection of the artist’s sketchbooks.

Beatrice Glow: Once the Smoke Clears
Beatrice Glow is a New York- and Bay Area-based multi-sensory and interdisciplinary artist whose work explores the social history of plants. For her first exhibition in a major U.S. museum, Glow delves into the unseen and unsavory sociohistorical and ecological realities underlying the tobacco industry’s veneer of luxury through her digitally printed and embroidered silk textiles, VR-sculpted and 3D-printed objects, watercolors, and scent experiences. In exploring the global uses of tobacco, Glow questions the embedded histories of visual culture by critiquing unresolved injustices wrought by colonial desires to profit from the lucrative tobacco trade. The artist weaves together tantalizingly decadent surfaces with imagery derived from historical sources, and examines the networks through which tobacco spread across the world. While the works initially appear as a celebration of opulence, closer inspection reveals the cascading impacts of colonialism, capitalism, and inequitable trade networks.

Shapeshifting: Transformations on Paper
Explore five centuries of the artifice of identity— from the splendid metamorphoses of classical myths to the posturing and bodily reinvention of contemporary drag culture. Shapeshifting includes approximately 50 prints, drawings, photographs, and artists’ books from the BMA’s collection that explore transformation and masquerade as recurring themes of artistic imagination across time and place. Graphic works by Margaret Burroughs, Théodore Chassériau, Zackary Drucker, Samuel Fosso, Hendrick Goltzius, Pablo Picasso, Man Ray, Gerda Wegener, and others depict ever-changing narratives in the physical and social world. Collectively, these works demonstrate shifting forms of personal and political subjectivity and explore how art subverts traditional structures based on assumed dichotomies of natural/unnatural and binary gender.

Matisse: The Sinuous Line
The second iteration of the inaugural exhibition in the new Ruth R. Marder Center for Matisse Studies continues the exploration of Henri Matisse’s graceful use of line with a new selection of works on paper from the BMA’s collection. Inspired by a masterpiece of line and movement, The Serpentine (1909), the exhibition features several of Matisse’s explorations of the reclining figure in bronze, which show him moving from a classical style toward a more streamlined treatment of the body. The same theme can be seen in these pen and ink drawings, aquatint, and innovative etchings and lithographs. Although best known as a painter, Matisse’s ability to convey his models’ personality with just a few lines is part of his great contribution as a draftsman and printmaker.

William Cordova: on the lower frequencies i speak 4 u
This exhibition showcases William Cordova’s on the lower frequencies i speak 4 u (2019), a remarkably complex work that originates from the Peruvian American artist’s research into individuals, places, and narratives significant to the Civil Rights Movement that intersect with contemporary social and musical history. The edition acquired by the BMA in 2021 includes a suite of 14 mixed-media prints, a wooden boombox with a wire hanger antenna, a handmade glass lens, and eight unique Polaroids. It is accompanied by a field recording made at the Harlem site of a Jimi Hendrix concert that the artist transferred to x-ray film. The title is inspired by the epilogue of Ralph Ellison’s landmark novel, The Invisible Man, and the work highlights important commonalities between Latin America, Black Harlem, and Spanish Harlem. By juxtaposing references to the past with more contemporary subjects, Cordova uses material culture as testimony to the ephemeral nature of documentation and memory.

Elle Pérez: Devotions
Organized by Carnegie Museum of Art, this exhibition debuts a recent body of work by New York-based artist Elle Pérez. Including 13 photographs created between 2019 and 2021, Devotions explores relationship building, creating space to reflect on how we navigate ourselves in relation to others and the world. Pérez’s carefully sequenced images dwell in moments of grief and care, pain and pleasure, desire and self-exploration. Amidst recurring motifs of water, touch, and BDSM are also striking choices in proximity, scale, color, and light. The works will be presented at the BMA as an immersive experience, connecting the John Waters Rotunda and adjacent galleries.

On Certainty: Gifts from the Collection of Suzanne F. Cohen
Suzanne F. Cohen’s (1935–2018) extraordinary leadership and enduring support for the BMA touched every area of the Museum. In addition to chairing the Board and numerous Trustee committees, Cohen helped establish an endowment for free admission and funded many exhibitions, commissions, restorations, public programs, and gifts of art. “For me, free admission is the capstone of my museum career,” Cohen said in 2016. “It synthesizes my passion for art and the meaningful place it can have in our lives with my personal commitment to social justice— the imperative that we share our wondrous Museum with all of our public all of the time.” In conjunction with the fall 2021 Contemporary Wing reinstallation, this exhibition will showcase some of the most significant works Cohen collected, lived with, and donated to the BMA, as well as acquisitions she helped facilitate. Highlights include a major multi-panel painting by Ellsworth Kelly and works in various media by leading conceptual artist Mel Bochner, with whom Cohen shared an enduring friendship. Important works on paper by Bruce Nauman, Sol LeWitt, Sylvia Plimack Mangold, Adam Pendleton, Marjetica Potrč, Robert Smithson, and others will be displayed in two five-month installations.

Spencer Finch: Moon Dust
Spencer Finch’s impressive light installation Moon Dust (Apollo 17), first presented at the 2009 Venice Biennale, will illuminate the BMA’s majestic Fox Court for the next seven years. The work consists of 150 individual chandeliers with 417 lights. The chandeliers are hung individually from the ceiling and form one large, cloud-like structure. Although an abstract sculpture, the installation is also a scientifically precise representation of the chemical composition of moon dust as it was gathered during the Apollo 17 mission. Finch translated the diagrams of the chemical formulas of the contained molecules by using light bulbs in different diameters and basic customary fixtures with different arm lengths to create a three-dimensional scale model of the moon’s atomic makeup. The diameter of a globe corresponds to the size of an atom and thus represents a specific element, the small globes representing helium, the bigger oxygen. The overall effect is one of science translated into visual wonderment.