Artur Menezes is an indie artist taking the blues rock scene by storm! As a highly energetic guitarist, singer and songwriter, Art impresses the crowds with his feeling and showmanship. Although very much influenced by blues, he crosses genres with psychedelic rock, funk and Brazilian rhythms such as “baião,” creating his own voice and sound, which has been attracting younger audiences and helping to keep the blues alive. Based in Los Angeles, the Brazilian artist is making his name playing around US, releasing his 5th album “Fading Away,” produced by Josh Smith and featuring Joe Bonamassa on October 30th, through Vizztone Group Label. 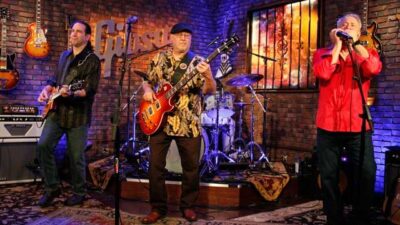 Washington D.C.’S Bad Influence breathes new life and fresh energy into blues and roots music! Staying at the apex of the mid-Atlantic region’s competitive blues and roots music scene for a career that spans three decades isn’t easy. But that’s what the Bad Influence Band has done — even while extending their reputation across the country thanks to wildly entertaining, high-energy performances, extensive airplay and three well-received albums.

Whether performing at a festival, on a stage at Kennedy Center, a showcase at the NAMM Show or on Memphis’ hallowed Beale Street, the four-piece group featuring guitarist Michael Tash, harmonica ace and singer Roger Edsall, bassist-vocalist Bob Mallardi and drummer David Thaler are unabashed crowd pleasers thanks to their expert ensemble playing, strong melodies, addictive grooves, sly original songwriting and sheer intensity.

Even audiences unfamiliar with blues and the other styles of roots music that inform the group’s wide repertoire are smitten with the Bad Influence Band’s joyful performances.