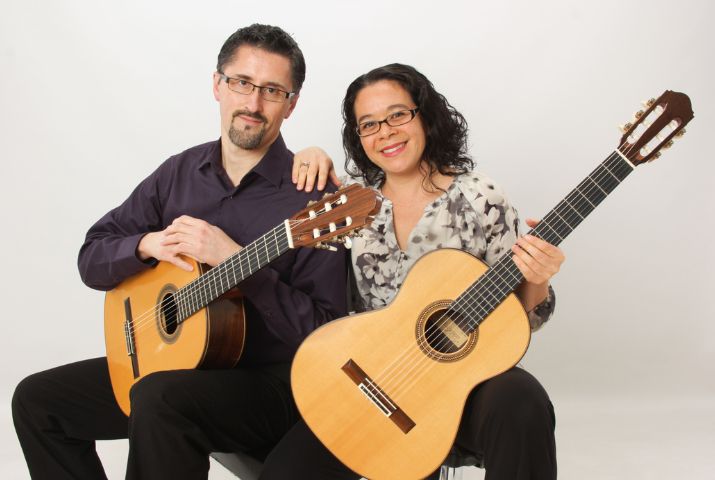 Formed in 2000, the husband and wife guitar ensemble of Kathrin Murray and Troy King, known as the Arabesque Duo, have performed to critical acclaim at concert venues in Boston, Philadelphia, New York, Baltimore, Washington D.C., Honolulu, Mendocino (CA), and Cheltenham (UK), to name a few. They have been guest artists at festivals such as the Bethlehem Guitar Festival, the Charlton Kings International Guitar Festival (UK), and the Interlochen Music Festival, and are winners of the Montpellier Arts Competition. The Glouchestershire ECHO (England) proclaimed, “Their strong musical rapport was evident in their playing… atmospheric… guitarists of world stature.” The Arabesque Duo’s recording on Centaur Records features transcriptions of piano pieces by Grieg, Brahms, Debussy, Granados and Turina. The American Record Guide wrote, “The Arabesque Duo plays beautifully on this recording, with a lovely tone and tasteful expressiveness…masterly Apollonian style.”

Guitarist Kathrin Murray has established herself as a passionately committed performer with the ability to present music with a “life of its own” and “beautiful tone” (The Washington Guitar Society). Having performed in the United States and Europe, Ms. Murray has been featured as a guest artist at the Charlton Kings International Guitar Festival (England), on the BBC, and at the Dutch and Finnish Embassies in Washington, DC. Recent performances have taken her to Bethlehem, PA; Westminster, MD; Fairfax, Virginia; Washington, DC; and the Shenandoah Conservatory in Virginia. She has won the Rising Stars Recital Competition, and has received the Levine Faculty Development Grant, the Peabody Career Development Grant, the Bowdoin Summer Music Festival’s Performing Associate Award, and has been a two-time recipient of the Levine Performance Grant. Currently she teaches at Notre Dame of Maryland University, McDaniel College, and the Baltimore School for the Arts in Baltimore, MD. Her debut CD, “Arabesques”, was released in 2008 on the Centaur Records label – “…a strong, precise, and yet lyrical player” (Soundboard). It features compositions by Manuel Ponce, Eduardo Sainz de la Maza, Maximo Diego Pujol, Agustin Barrios and Gilbert Biberian; it was a recipient of a prestigious 2008 Maryland State Arts Council Grant.

Kathrin holds a Master’s Degree from the Peabody Conservatory of Music, where she studied with Julian Gray and a Bachelor’s degree from the Lamont School of Music of the University of Denver, where she was a scholarship student of Ricardo Iznaola. She has also studied at the Bowdoin Summer Music Festival and privately with composer Gilbert Biberian in England. Visit www.kathrinmurray.com.